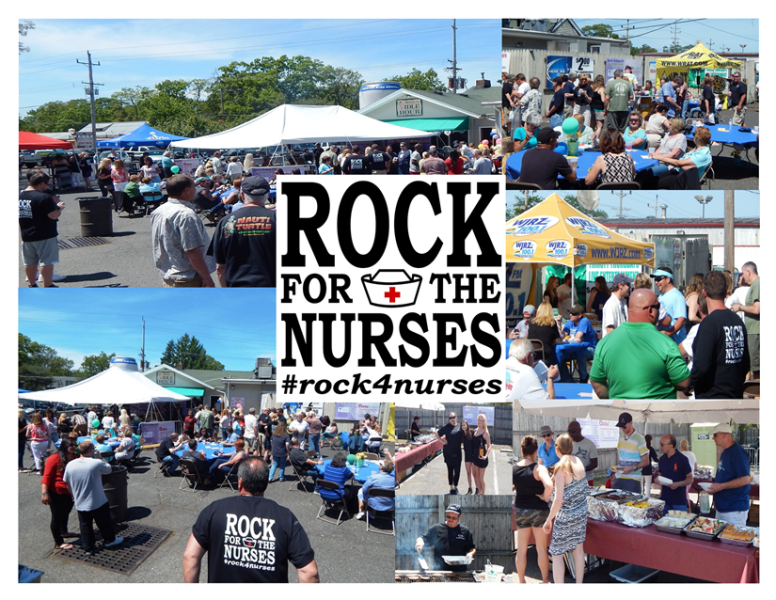 JUNE 1, 2014 (POINT PLEASANT, NJ) - The Barbara Forfar Nursing Scholarship Fund held its third annual benefit fundraiser “Rock for the Nurses” at the Idle Hour Restaurant in Point Pleasant Sunday afternoon June 1 and the estimated crowd of over 200 guests in attendance were treated to a very special day of outstanding live music, delicious food, prizes and give-a-ways, all to help raise funds to provide educational scholarships to nurses and nursing students of the Ocean Medical Center in memory of Barbara Forfar.

In all, six of the top musical groups around the Jersey Shore and their band members donated their time for the day and performed for approximately sixty minutes each on inside and outside stages with Bobby Clark and Mark Fiore providing the sound mixing for the bands.

The “Rock for the Nurses” BBQ, Tent Party and Pig Roast took place from 12 noon to 6pm at The Idle Hour on Route 88 with 100% of the proceeds going to Barbara Forfar Nursing Scholarship Fund.

“We would like to extend a sincere thank you to all our guests who joined us at the Idle Hour for this year’s fundraiser and to those who made direct donations to the scholarship fund. On behalf of the entire scholarship committee, we cannot thank you enough for your support. Although we still have some donations and pledges pending, I can safely say that Rock for the Nurses 2014 was one our most successful fundraisers ever” mentioned Walt Konopka, chairperson of the Barbara Forfar Nursing Scholarship Fund.

“We are also extremely grateful to all of our event partners this year including The Ocean Medical Center Foundation and The Meridian Health Organization, Greater Media Radio NJ Stations WRAT and WJRZ, Gourmet Grillers & BBQ Specialists, U.S. Subs and Wraps, Bobby Clark Events, The Bow-Kay Florist of Brick, Herrmann’s Screen Printing & Embroidery of Spring Lake, TLC Banner and Sign of Toms River, PIP Printing of Toms River, Antsy the Clown of Point Pleasant, Richards Party Rentals of Point Pleasant, Shore Point Distributors and NJ Coors, DigitalEffex of Manalapan, MCS Web Solutions of Toms River and of course all the owners, management and staff of the Idle Hour Restaurant. We could not have done this without the help of Lee and his crew. They were absolutely tremendous!”

“In addition, the success of this event could not have been accomplished without all of the musicians and band members who donated their time for the afternoon. They were fantastic, some of the best around the Jersey Shore and they had The Idle Hour rocking the entire afternoon and we are sincerely grateful to all of them” Konopka finished.

Point Pleasant native Tyler Veit, a 17 year old blues rock guitarist and his band Bad Minds, who appeared at the fundraiser for the first time, kicked-off the event under the tent outside with some classic rock tracks from Led Zeppelin, Cream and Pink Floyd among others. Veit and his band, which have already have performed at Jersey Shore icon venues The Stone Pony and The Headliner, closed out their set with the James Gang’s “Walk Away” and had the guests rocking.

Where’s Judy an acoustic quartet who also joined the fundraiser for the first time this year, was up next on the inside stage and members Gerry Luongo (Toms River), Matt “The Barber” Andryszewski (Toms River), Judy Albanese (Toms River) and Laura Drozd (Toms River) were pounding out vocals to some legendary cuts from Carol King to Crosby Stills & Nash to The Band. The silky-smooth foursome ended their performance with an A cappella version of “Amazing Grace” which had the crowd wanting more.

The Matt Noffsinger Band, who made their second consecutive appearance at “Rock for the Nurses”, then cranked up the event outside with some rock & roll classics from John Cougar, The Rolling Stones, Allman Brothers and Van Morrison. Founded by Wall Township native Matt Noffsinger (lead guitar and vocals), the band, which has been performing up and down the Jersey Shore for over 12 years, ended their sixty minute set performing Joe Cocker’s rendition of “A little help from my friends” drawing a standing ovation from crowd outside. 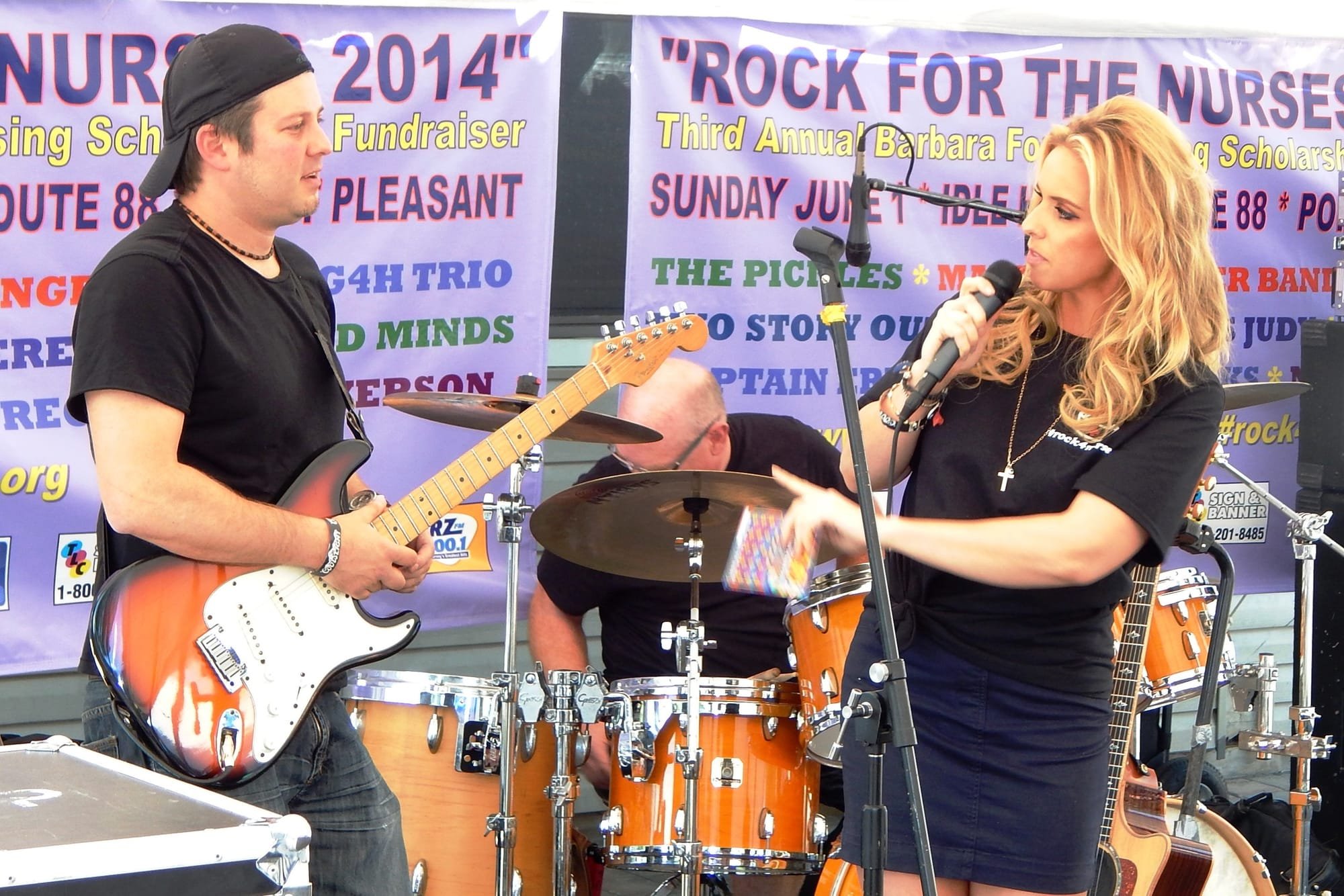 Jersey Shore main-stay rockers The Pickles, who were formed in the late 1990s, appeared at Rock for the Nurses for the first time this year and treated the Idle Hour crowd inside to a unique acoustic performance with cuts from Bob Marley, Kid Rock, Tom Petty and others. Boose Rutledge of West Creek and Todd Raupp of Manahawkin, belted out some classics with pin-point harmonies which had the Idle Hour guests singing along.

Captain Eric & The Shipwrecks, one of the Jersey Shore’s premier acoustic cover bands, closed the stage outside with some great cuts from Jimmy Buffett, Bruce Springsteen, Jackson Browne and others which had the outside crowd dancing on their feet in the late afternoon. The Shipwrecks, who appeared at the fundraiser for the first year, include Eric Clark (Asbury Park), Dave Cohen (Toms River), Steve Schafer (Clinton) and Mike “Buttercup” Pape (Toms River).

Two Story Outhouse, who made their public debut at last years’ fundraiser, returned for a second year in a row and finished-up the afternoon on the Idle Hour’s inside stage keeping the crowd rocking into the early evening. TSO, a six piece cover band based out of Toms River includes Ryan Tierney (bass), Matt Cicalese (drums), Brian Lloyd (keys), Bryan Murray (guitar), Ned Ryerson (guitar/vocals) and John Hoffman (ukulele/vocals).

Two highlights of TSO’s Rock for the Nurses closing performance included Boose Rutledge of The Pickles joining them on stage and belting out “Chicken Fried” by The Zac Brown Band which had the crowd yelling for more. TSO then called upon 8 year-old Brayden Forfar (grandson of the late Barbara Forfar) to sit in on the drums jamming out to Seven Nation Army by The White Stripes which drew a standing ovation from all the guests, staff and other musical performers still present. 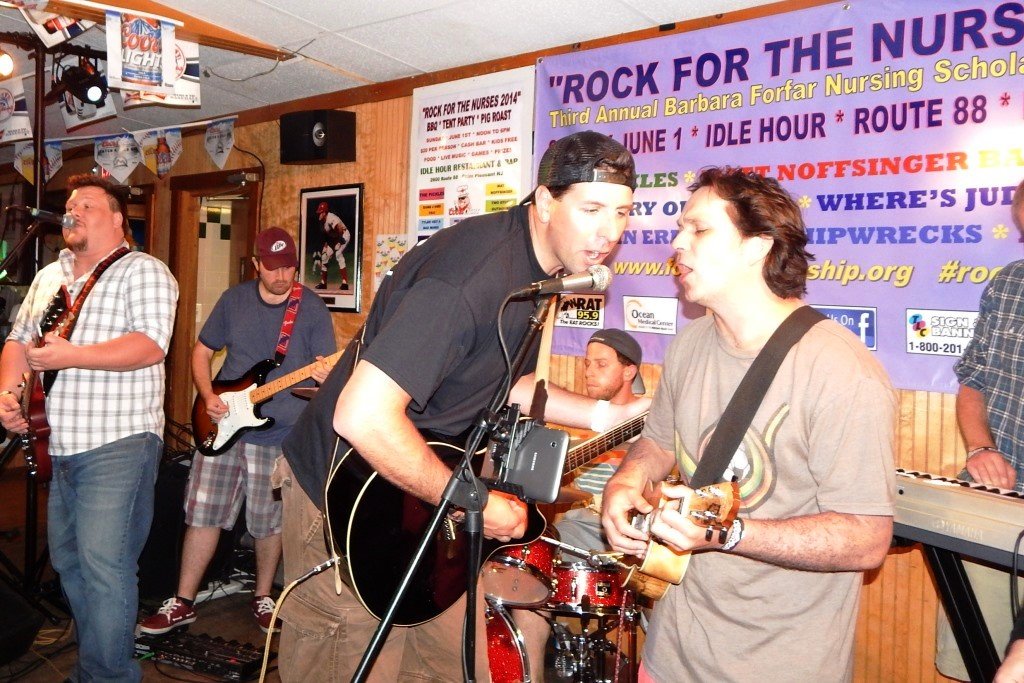 Emmy award winning media personality Maria Papadakis of NBC Sports and Comcast SportsNet, Rockin Robyn Lane of WRAT-FM and Barbara Farragher of WJRZ-FM co-emceed the event. In addition, both the WRAT and WJRZ event and promotion crews were on hand with Robyn and Barbara throughout the afternoon performing interviews and call-ins and providing various give-a-ways, promotions and games for everyone in attendance.

All proceeds of the fundraiser went directly to the Barbara Forfar Nursing Scholarship Fund which annually benefits the nurses of Ocean Medical Center of by providing nursing scholarships to nurses and nursing students of the hospital looking to further their formal education in the nursing profession.