Rock For The Nurses 2015 Fundraiser Goes Off The Charts 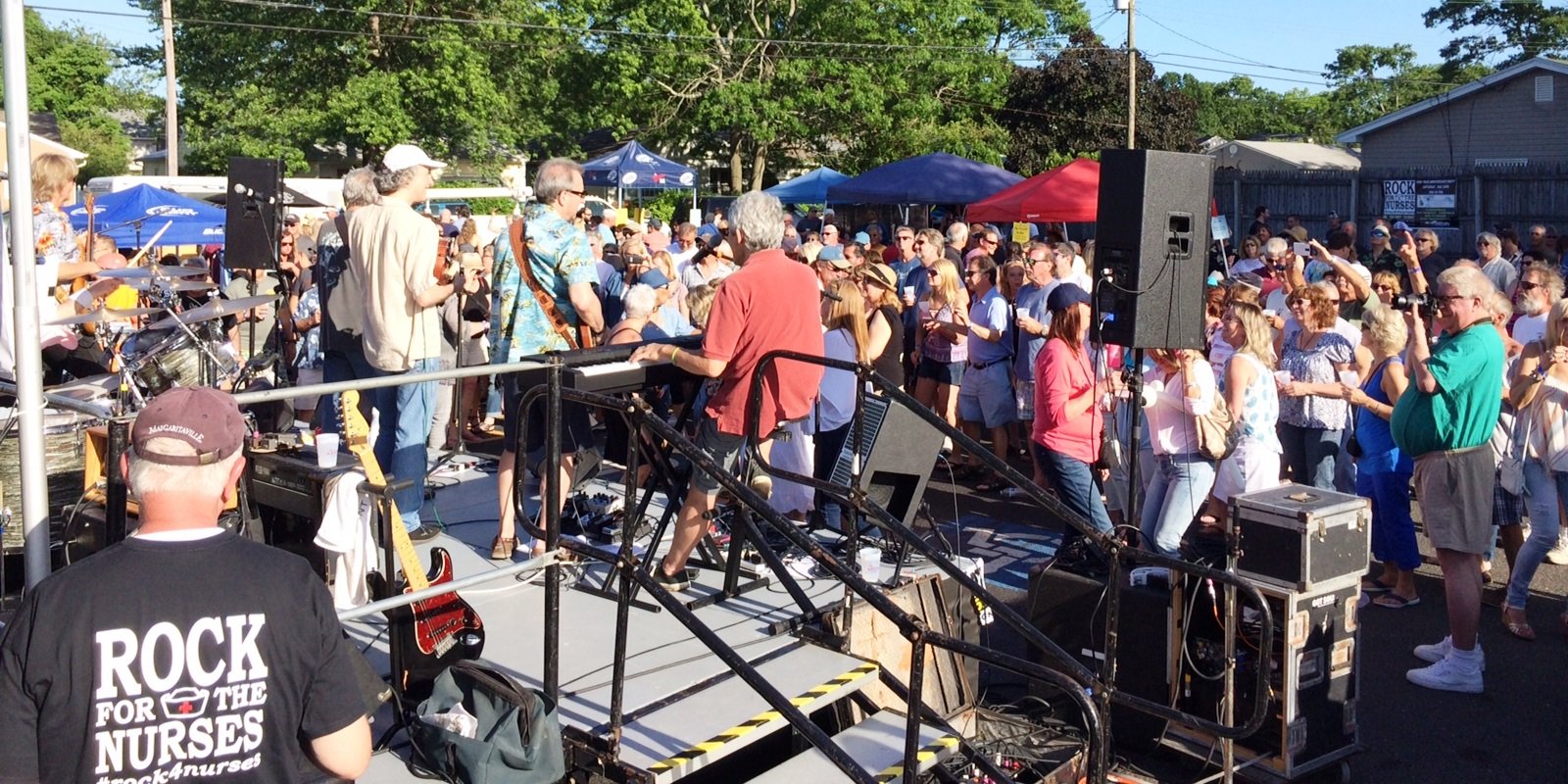 MAY 30, 2015 (POINT PLEASANT, NJ) - The Barbara Forfar Nursing Scholarship Fund held its five-year anniversary fundraiser Rock for the Nurses at the Idle Hour Restaurant in Point Pleasant Saturday May 30th and the capacity overflowing crowd in excess 425 guests in attendance were treated to a spectacular afternoon of delicious food and live music in a concert like setting, including seeing the return of the legendary country-rock band Kinderhook (formerly Kinderhook Creek) to Point Pleasant for the first time in over thirty years.

A barbecue buffet, pig-roast, prizes and give-a-ways were also part of the event to help raise funds to provide educational scholarships to nurses and nursing students of the Ocean Medical Center in memory of the late Barbara Forfar.

In addition to Kinderhook, other bands included Ned Ryerson and the Groundhogs, Timepiece and The Mangos who all donated their time for the day performing for approximately 60 minutes each on an outside stage with Bobby Clark providing the sound mixing for the bands and John Deeney streaming the audio and video to the guests seated inside.

Rockin Robyn Lane of WRAT-FM and Barbara Farragher of WJRZ-FM helped emcee the event. In addition, both the WRAT and WJRZ event and promotion crews were on hand with Robyn and Barbara throughout the afternoon performing interviews and call-ins and providing various give-a-ways, promotions and games for everyone in attendance.

The Rock for the Nurses five year anniversary fundraiser took place from 1pm to 7pm at The Idle Hour on Route 88 with 100% of the proceeds going to Barbara Forfar Nursing Scholarship Fund. 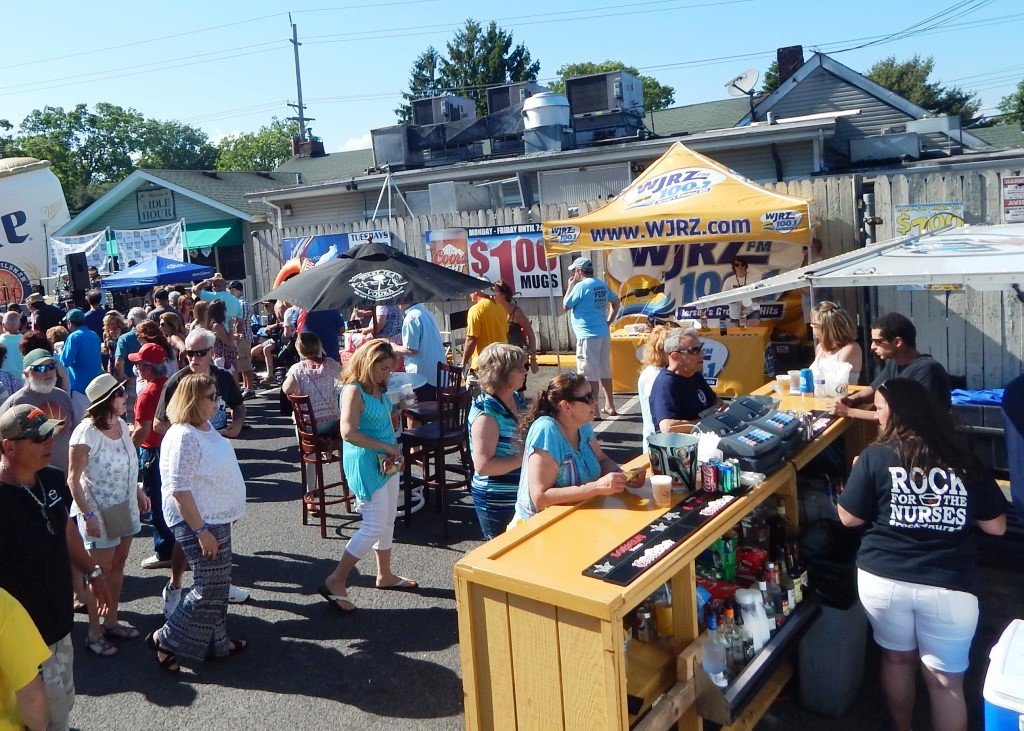 “Our fundraiser this year set all-time financial and attendance highs. It was a spectacular afternoon in a concert like setting. We would like to extend a very sincere thank you to the hundreds of guests who joined us at the Idle Hour this year and also to those who made direct donations to our nursing scholarship fund. On behalf of the entire scholarship committee, we cannot thank you enough for your support. Saturday afternoon was absolutely incredible” mentioned Walt Konopka, chairperson of the Barbara Forfar Nursing Scholarship Fund.

“We are also extremely grateful to all of our event partners this year including The Ocean Medical Center Foundation and The Meridian Health organization, Greater Media Radio NJ Stations WRAT and WJRZ, Gourmet Grillers & BBQ Specialists of Point Pleasant, U.S. Subs and Wraps of Point Pleasant, Bobby Clark Events of Seaside Park, John Denney of PLS Staging of Cedar Grove, Herrmann’s Screen Printing & Embroidery of Spring Lake, TLC Banner and Sign of Toms River, PIP Printing of Toms River, Antsy the Clown of Point Pleasant, Richards Party Rentals of Point Pleasant, Wolf Productions of Oakhurst, Shore Point Distributors and NJ Coors, DigitalEffex of Manalapan and of course the owners, management and staff of the Idle Hour Restaurant. We could not have done this without the help of Tom and Lee and the Idle Hour crew. They were absolutely tremendous again this year!”

“And finally, the off-the-charts success of our fundraiser this year could not have been accomplished without all of the incredibly talented musicians and band members who donated their time for the afternoon. They were absolutely fantastic, some of the best New Jersey has to offer and they had The Idle Hour filled to capacity rocking the entire afternoon and we really cannot thank all of them enough” Konopka finished.

RONNIE BROOKS of Brick started the festivities by belting out The Star Spangled Banner to a standing ovation.

NED RYERSON and his new band THE GROUNDHOGS were the first up on stage performing several contemporary and classic rock tunes including “I’ll Melt The World” from Modern English, “Hey Ho” by The Lumineers and the Beatles classic “I Saw Her Standing There” among others.

Mid-way through their set, The Groundhogs invited Brooks to join them in a reggae version of “Margaritatville” which had the crowd on their feet and singing along. 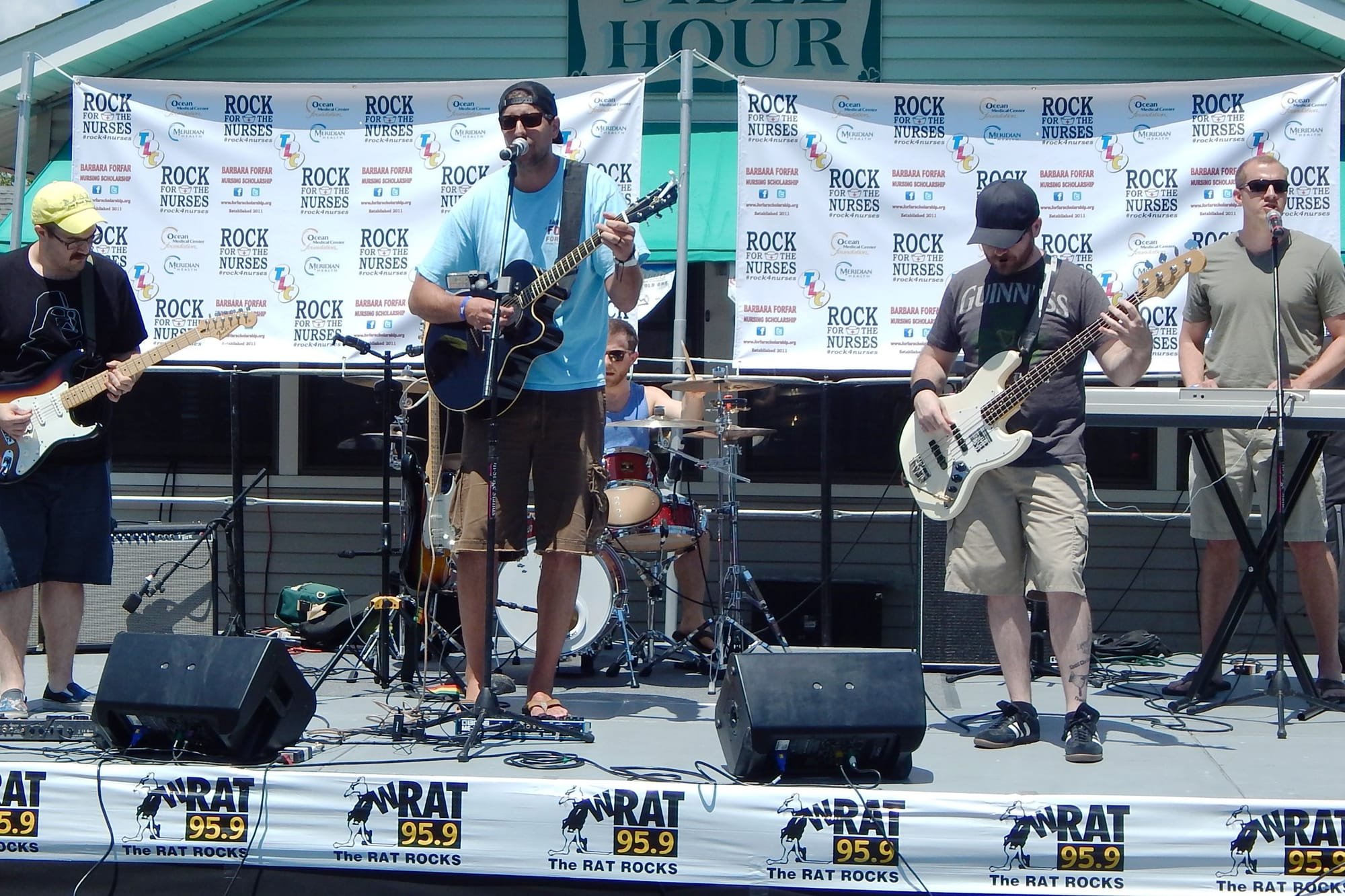 TIMEPIECE, who appeared at Rock for the Nurses in 2013, then took center stage and got the crowd rocking right from the start serving-up “This House Is Rockin” by Stevie Ray Vaughn followed by classic cuts from Bruce Springsteen, The Rolling Stones and much more.

Founded in 1990 by Terry Wildeman (lead guitar and vocals) who grew up in the shadows of Asbury Park and now lives in the Wall Township area and Fred DeFeo of Island Heights (drums and vocals), Timepiece also includes Frank Pagano of Colts Neck (bass and vocals) and Mike Scialfa of Little Silver (keyboards).

THE MANGOS then followed opening with “Keep Your Hands To Yourself” by The Georgia Satellites which had the near capacity crowd dancing between the tents and also performed southern rock classics from the Allman Brothers, Grateful Dead and Lynyrd Skynard in their set.

In a tribute to Ben E. King, The Mangos also called Ronnie Brooks to the stage as they harmonized on “Stand By Me” which had the crowd yelling for more.

After a rising introduction, KINDERHOOK opened their return to Point Pleasant belting out Barker and Dillon’s “Easy Come Easy Go” followed by “Little Less Talk” by Hank Williams Jr. and then “Cash on the Barrelhead” by the Louvin Brothers as the packed audience stood cheering on their feet.

One of Kinderhook’s highlights came early in their set when they performed Bob Wills’ “My Window Faces The South” with incredible four-part harmonies and tight solo instrumentals by John Korba on piano, Jimmy Ryan on pedal steel, Gary Oleyar on the fiddle and Jack Kurlansik on guitar.

Another highlight included Kinderhook asking Joe Prewitt of The Mangos to sit in on a rousing rendition of Leiber and Stoller’s “Kansas City” which had the crowd go wild.

Kinderhook ended their performance and historic return to Point Pleasant with Jackson Browne’s “Redneck Friend” with the crowd giving them a fifteen minute standing ovation.

All proceeds of the fundraiser went directly to the Barbara Forfar Nursing Scholarship Fund which annually benefits the nurses of Ocean Medical Center of by providing nursing scholarships to nurses and nursing students of the hospital looking to further their formal education in the nursing profession.